I was born into a second generation of Italian immigrants that loved hard work and life. Half the families were fishermen the other half were farmers, but we all enjoyed the wine made by my grandfather on Sunday after church. Every Sunday one of my aunts would host a lavish spread after we all went to church. This consisted of different homemade pastas, fish, chicken, beef and several vegetable dishes, all with Nuno’s Zinfandel which the kids called “Diego Red.” All our meals during the week included wine and I am sure that because of that, all my grandparents and relatives lived into their 90’s.

Since the family was very tight everyone shared in the task of making an ample supply of wine for the family meals and celebrations. This included me at eight years of age. On the first day I would head down to fisherman’s wharf to hop on my grandfather’s boat with my dad and head to Stockton to pick up a load, around a hundred lugs of grapes. This was an all day event. The next day started the crush. My cousin Ken and my job were to hop into the 1000 gallon redwood tank and stomp the grapes while my dad and grandfather sang Italian songs. The real fun job was when we pressed the grapes. This meant we could drink the partially fermented wine which tasted like blackberry soda with a kick, of course in moderation. 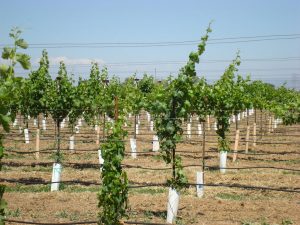 I chose the Lodi region for the deep soils, abundance of pure water and the many micro-climates. After a few years of studying the soils in the Lodi region, we determined that the soils and micro-climate in the Clements Hills sub AVA offered the best of all criteria to grow premium French, Spanish and Italian grapes. The soils consisted of course sandy loam about 40 inches to a very hard cement pan which was about 4 inches thick. Under that there was another 80 feet of course sand, clay and gravel. The soils were derived from granite washed down from the Sierra’s in the East and volcanic ash. The soils are very old and due to that very low in organic matter. This gave us a clean pallet to work from.

The first order was to have a soil survey done to delineate the soil types and boundaries. After that a full topographic survey was done to determine any drainage issues and a grading plan was generated. Once this was done, soil and water samples were sent to the lab for analysis. The report came back, water as pure as snow and the soils poor in many essential nutrients. From this we developed a schedule of what organic materials to apply before sub soiling. Once a thick layer of organic matter was applied to the graded surface the soil was slipped plowed down to 7 feet to break up the hard pan and distribute the organic matter through the soil profile. When this was completed the field lay fallow through the winter and in the late spring. Meanwhile we laid out the vineyard blocks by soil type, permeability and water holding content. These major blocks where than divided into one and two acre blocks each having their own water valve.  In the following spring the field was disked smooth ready for laying out the vineyard.

In most vineyards especially in Lodi the vines rows are laid out in an east / west orientation. This is to allow the prevailing winds to pass down the rows and not cause problems for cane training. This orientation has one drawback; the fruit on the south side of the vine getting the majority of the radiation from the sun is 4 times riper than the fruit on the north side of the vine. The other disadvantage is that the fruit on the south side is subject to sun burn. With this in mind we performed many solar observations during the growing season to determine the proper row orientation to insure equals solar radiation on both sides of the vines. This worked out well for us in two ways. Our grapes are less prone to sunburn and taking good use of the prevailing wind to mitigate the use of fungicides. This was a gamble due to the fact some rows were very short, but worked out in spades. To this date we have applied only a minimal amount of sulfur to the Sauvignon Blanc block and none to the other blocks. To this date we have had no mildew or other rots in our vineyard.